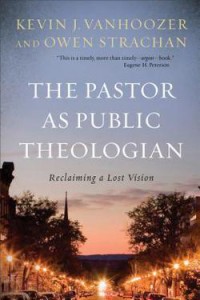 There are certain books whose effect largely depends on the time in life when you read them. For instance, I’d say that Frank Thielman’s Paul and the Law: A Contextual Approach was one of the most significant books that I read while in seminary. It was while reading that book that I understood for the first time the significance of the biblical covenants. I know that I had read about the covenants before, but their role in Scripture and my relation to them clicked for the first time while reading Thielman. That book may not have been as significant to my thinking had I already developed my thinking on the covenants and on the Mosaic Law. I have the sense that Vanhoozer and Strachan’s could have a similar effect on a seminarian or pastor—it could reshape the way they think about ministry. Others will already share their vision, making the book less significant to them.

Vanhoozer and Stachan’s basic message is that pastors need to reclaim their vision of the pastorate from secular sources and seminaries need to be reshaped so that pastors rightly see their mission to be that of theologians. The pastor theologian is not an academic. Rather, he is a public theologian in the sense that he helps God’s people live out God’s Word in all of life. There are a number of ways that a pastor achieves this goal (e.g., pastoral visitation, counseling), but the sermon ought to be the central means.

I’m in agreement with the central message of the book, but some things gave me pause.  I remain unconvinced that Rowan Williams, for instance, is really the most faithful model to set before readers. I also remain skeptical that the Christological offices of prophet, priest, and king are a model for pastoral ministry.