Grimm, Harold J., ed. Career of the Reformer I 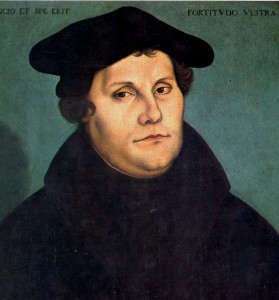 This volume of Luther’s works covers his early writings at the time that he was breaking from Rome. It includes: “Disputation against Scholastic Theology,” Ninety-Five Theses,” Heidelberg Disputation,” “Preface to the Complete Edition of a German Theology,” Explanations of the Ninety-Five Theses,” “Proceedings at Augsburg,” “Two Kinds of Righteousness,” “The Leipzig Debate,” “The Freedom of a Christian,” and “Why the Books of the Pope and His Disciples Were Burned.”

“The Ninety-Five Theses” is, of course, a must read for its historical significance. I also especially benefited from the “Heidelberg Disputation,” “Two Kinds of Righteousness,” and “The Freedom of a Christian.” In these works Luther is abundantly clear why good works are completely unable to save a person while at the same time defending the importance of good works for the Christian. These works also provide a window into the kinds of abuses within the Roman Catholic church that spurred Luther to press for reformation. Finally, reading these works first hand was also a helpful reminder about Roman Catholic teaching at this time. For instance, Luther’s attack on the authority of the pope was not an innovation. He’s drawing on medieval thinkers who thought the pope should be subject to counsels, for instance. Some of the positions that later became hardened into a Roman Catholic position and a Protestant position were still open questions as Luther was raising them.

Here are some samples from this volume:

Therefore, since the spirit of Christ dwells within Christians, by means of which brothers become co-heirs, one body, and citizens of Christ, how is it possible for us not to be participants in all the benefits of Christ? Christ himself has all that belongs to him from the same Spirit. So it happens through the inestimable riches of the mercies of God the Father, that a Christian can be glorified with Christ and can with confidence claim all things in Christ. Righteousness, strength, patience, humility, even all the merits of Christ are his through the unity of the Spirit by faith in him. All his sins are no longer his; but through that same unity with Christ everything is swallowed up in him. And this is the confidence that Christians have and our real joy of conscience, that by means of faith our sins become no longer ours but Christ’s upon whom God placed the sins of all of us. He took upon himself our sins [Cf. Isa. 53:12]. Christ himself is “the Lamb of God who takes away the sins of the world” [John 1:29]. All the righteousness of Christ becomes ours. He places his hand upon us and all is well with us [Cf. Mark 5:23]. He spreads his cloak and covers us [Cf. Ruth 3:9], blessed Savior throughout all ages, Amen.

Against the doctrine of supererogation (and thus against a treasury of the saints’ merits):

Second, no works of the saints are left unrewarded, for, according to everybody, God rewards a man more than he deserves. As St. Paul says, “The sufferings of this present time are not worth comparing with the glory that is to be” [Rom. 8:18].

Third, no saint has adequately fulfilled God’s commandments in this life. Consequently the saints have done absolutely nothing which is superabundant. Therefore they have left nothing to be allocated through indulgences. I believe that the inference is clear enough. But I shall prove the major premise so that there is no doubt about it, but that it must be believed in such a way that the opposite view would be considered heretical.

I prove this argument first by that saying of Christ, “When you have done all that is commanded, say ‘We are unworthy servants’ ” [Luke 17:10]. But the term “unworthy servant” is understood to refer to one who has done less and not more than he should. . . . I prove this argument secondly by that passage in Matt. 25[:9] which says that the wise maidens had no desire to share their oil for fear that there would not be enough also for themselves. Third, Paul says, I Cor. 3[:8], “Each shall receive his wages according to his labor.” He does not say, “according to another’s labor.”

Fourth, I adduce Galatians 6, “Everyone must answer for himself” [Cf. Gal. 6:4–5], as well as the saying, “So that each one may receive … according as he has done in the body” [II Cor. 5:10]. Fifth, every saint is obligated to love God as much as he can, indeed more than he can, but no one has or can do that. Sixth, the saints, in their most perfect work, that is, through death, martyrdom, and suffering, do no more than is required. Indeed they do what is required and scarcely that. Therefore they have done much less than they should in other works. Seventh, although I have produced so many reasons, they, on the other hand, to support their position, have not produced one, but only a recital of the circumstances, speaking without proof from the Scriptures, the teachers of the church, and sound reasons. For that reason we can, indeed we must, completely ignore their opinion.

Should you ask how it happens that faith alone justifies and offers us such a treasure of great benefits without works in view of the fact that so many works, ceremonies, and laws are prescribed in the Scriptures, I answer: First of all, remember what has been said, namely, that faith alone, without works, justifies, frees, and saves; we shall make this clearer later on. Here we must point out that the entire Scripture of God is divided into two parts: commandments and promises. Although the commandments teach things that are good, the things taught are not done as soon as they are taught, for the commandments show us what we ought to do but do not give us the power to do it. They are intended to teach man to know himself, that through them he may recognize his inability to do good and may despair of his own ability. That is why they are called the Old Testament and constitute the Old Testament. For example, the commandment, “You shall not covet” [Exod. 20:17], is a command which proves us all to be sinners, for no one can avoid coveting no matter how much he may struggle against it. Therefore, in order not to covet and to fulfil the commandment, a man is compelled to despair of himself, to seek the help which he does not find in himself elsewhere and from someone else, as stated in Hosea [13:9]: “Destruction is your own, O Israel: your help is only in me.” As we fare with respect to one commandment, so we fare with all, for it is equally impossible for us to keep any one of them.