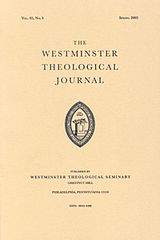 This article is the second in a recent trilogy of articles by Poythress on the opening chapters of Genesis. The heart of the article is a step through the creation week with particular attention given to correlations between God’s creation activity and normal providence. For instance, in normal providence heavy rains may cause water to cover dry land. Later the water recedes to show the dry land. This ordinary providence aligns with God’s causing the dry land to appear out of the water in creation. Or, God specially created the animals, but animals are “created” providentially though the normal processes of birth. I thought that Poythress sometimes showed real correlations between creation and providence, but other times I thought he was trying too hard. For instance, he sees a correlation between the original gift of food to eat in Genesis 1:29 and eating of plants today by humans. However, this is a stretch because God’s speech is looking beyond the creation week to the future. It’s not clear that something beyond ordinary providence was ever intended.

Poythress draws two conclusions from his observations regarding correlations between creation and providence. First, he looks at ANE creation myths and their similarities to the Genesis account. After noting that the differences between Genesis and the myths are far greater than the similarities, Poythress posits that many of the existing similarities developed as pagans  shaped their creation myths from observations of a providentially ordered world—a providential ordering that God had correlated with the true creation. This is an intriguing thought, but it would have been nice of Poythress had worked through some specific examples.

Second, Poythress concludes that the days of creation are functional days rather than a week of six normal days. He says that since God rested from creation on the seventh day, the day of God’s rest is everlasting. This seems to be to be an unwarranted assumption. God’s rest from creation may be everlasting, but it does not follow from this that the seventh day is everlasting. In addition, I’m not sure how to make sense of the claim that the days of the creation week are somehow “God’s days,” days that are only analogous to human days in normal providence. God is eternal and, as I understand eternity, there are no successive God-days for human days to be analogous to. Nor is there anything in the text of Genesis to indicate that the first week is different from succeeding weeks in human history. Just because some things in the creation week are analogous to ordinary providence (e.g., special creation of animals correlates to the birth of animals) does not mean that the water of Genesis 1 is only analogous to water in ordinary providence (as Poythress suggested of Genesis 1:2) or that the days of Genesis 1 are only analogous to ordinary days.

I found Poythress’s first conclusion intriguing but in need of further support. I found his second conclusion less than persuasive.