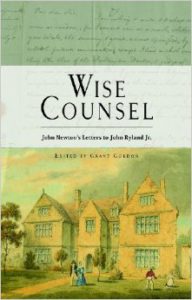 This is a collection of letters, many previously unpublished, from the Anglican minister John Newton to the Baptist minister John Ryland, Jr. The name of John Ryland, Jr. may be unknown to many, but he was one of the rope-holders for William Carey, who is well-known for his pioneer missionary work in India. The letters begin when Ryland is a young man and continue into Newton’s last years of life. The title of the book captures their nature. These are letters of wise counsel from an older minister to a younger. Since they cover such a long span of time, a whole variety of life’s experiences are commented upon. These are well worth reading and meditation.