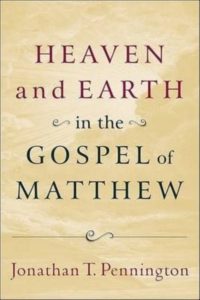 Pennington challenges the commonly accepted idea that in Matthew’s phrase “kingdom of heaven,” “heaven” stands as a reverential circumlocution for God. He notes that though this view is commonly stated in virtually all commentaries on Matthew, it rests on a single article by Gustaf Dalman, which is methodologically problematic. It is difficult to establish from contemporary writings that the Jews consistently or widely adopted reverential circumlocutions for God.

He argues that instead Matthew uses the phrase “kingdom of heaven” as part of a larger heaven and earth theme in the Gospel. He notes four distinctive ways in which Matthew develops this theme. First, Matthew purposely uses the singular of the Greek word for heaven to refer to the terrestrial heaven and the plural of heaven to refer to the divine dwelling place. Second, he will pair heaven and earth as words and thematically. Third, he refers to God as Father in heaven both because Father conveyed kingly overtones and in contrast to earthly fathers. Finally, the phrase “kingdom of heaven” refers to a kingdom from heaven and/or a kingdom characterized by heaven. The terminology is developed from Daniel 2-7, and the point is to contrast the earthly kingdoms in rebellion against God (see also Psalm 2) and God’s heavenly kingdom.

Pennington himself summarizes the theme and its significance: “behind it all is an intentional focus on the theme of heaven and earth, specifically highlighting the current contrast or tensive relationship between the two realms, between God and humanity. Yet Matthew does not only emphasize the contras, but also the fact that this contrast or tension will be resolved at eschaton when heaven and earth are reunited through Jesus (6:9-10); 28:18). In fact, only by recognizing the intensity of the tension that currently exists between heaven and earth can we fully appreciate the significance of the eschaton in which the kingdom of heaven will come to earth” (342-43).

This is a tightly argued, well-written, stimulating book. I found it’s thesis compelling. The one major development that I would like to see is a sharpening of the referent of the kingdom of heaven/God in the Gospels. Pennington, and seemingly the literature he interacted with, took the kingdom of God to be the kingdom God rules. I would argue, however, that what is announced in the Gospels is not only a fuller manifestation of God’s reign on earth (though it is that). I would argue that the kingdom theme finds its roots in Genesis 1:26-29. Mankind is given rule over the earth, and it is the Son of Man who brings the heavenly kingdom to earth so that the rule of man is no longer bestial and in rebellion against the heavenly King but is a ruler under God’s greater rule. This understanding of the kingdom better recognizes the importance of the incarnation, the Davidic covenant, the key passages in Daniel 4 and 7, and the seminal nature of Genesis 1:28. What is more, I think the development harmonizes well with Pennington’s thesis and even strengthens his argument.