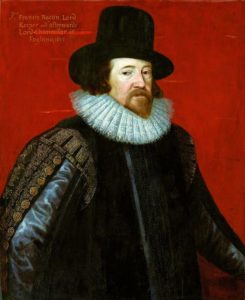 Though Francis Bacon is sometimes read as instituting a strict separation between science and theology and even as a closet deist or atheist, Mathews makes the case that Bacon was driven by a clear theological vision.

The bulk of the book examines the theological underpinnings for Bacon’s “Great Instauration.” An “instauration” is a “renewal” or a “restoration.” Bacon saw as part of salvation history a Great Instauration or restoration of human knowledge of and dominion over the world.

Bacon observed that mankind was given dominion over the earth in Genesis 1:28. He combined this text with Proverbs 25:2, “It is the glory of God to conceal a thing, but it is the glory of the king to find it out” to conclude that coming to a knowledge of the creation is a key part of human dominion over the creation. In the Fall mankind lost his “mastery over nature” (52). It was not only man who rebelled in the Fall, but the Fall resulted in the rebellion of nature against man. Hence the need for a Great Instauration that restores human knowledge over the creation and the restoration of human dominion. Bacon observed, “For man by the fall fell at the same time from his state of innocency and from his dominion over creation. Both of these losses however can even in this life be in some part repaired; the former by religion and faith, the latter by arts and sciences” (103).

In Bacon’s conception God is “the Author of the Scriptures, which were the source of true faith” and “the Author of the Book of Nature, which was the Bacon’s primary text for natural philosophy” (27). This distinction he bases on Matthew 22:29, “Ye err, not knowing the scriptures nor the power of God.” “The power of God” in Bacon’s interpretation of this verse stands for the book of nature, for it is in that book that God’s power is on display (Rom. 1:20). Though some scholars have seen in this distinction a sacred/secular divide. Mathews note that to the contrary, “Bacon sees scientific work in religious terms” (as can be seen in the quotation above where arts and sciences have a redemptive role to play in salvation history) (104). He does, however, caution against trying to base “religious and metaphysical ideas” in nature or to develop one’s natural philosophy (what today is called science) from the Bible.

Bacon believes that he sees this Great Instauration prophesied in Scripture. A key text is Daniel 12:4, which said that at the “time of the end,” “may shall run to and fro, and knowledge shall be increased.” Bacon saw this being fulfilled in his own day as exploration and expansion of knowledge seemed to increase like never before. Bacon observed that in previous generations there was not as much travel and interchange of ideas. In addition the pagans confused the two books of God and tried to establish religion from the book of nature. This misuse of the book of nature prevented its right use. Thus the Incarnation needed to “restore man to God” before the Instauration could take place. (86)

Theoretically, it could have taken place earlier, but the scholastics were too influenced by Greek thought on the one hand and did not travel much on the other (Daniel 12:4 again). Bacon, however, believed that providentially the world stood on the verge of great things and that the Great Instauration could possibly begin in his day. He believed that the English people had a special role to play in God’s plan of salvation history and he aimed to use his high office to promote the Great Instauration.

In order for humans to successfully bring about a Great Instauration, they had to have the ability to bring it about. Bacon therefore firmly rejected the teaching of the Western Church on the effects of sin. Mathews notes, “For Calvin, recovery was precluded by the doctrine of total depravity in which man’s intellect was corrupted in the fall, and no longer capable of correct, or uncorrupted, knowledge. For Aquinas, and for most Western Christians who were not Calvinist, complete recovery was precluded not because the human reason itself was always corrupt, but because the ubiquitous sinful nature always derailed even the best efforts of the intellect” (75). Mathews claims that Bacon read the Eastern fathers, and that from them accepted the view that “mankind was born weak” and into a “tainted environment,” but the intellect was certainly not corrupted by the fall. Sin made it more difficult to gain knowledge, but it did not make it impossible. Bacon held to the “possibility that, through collective effort and correction, the errors of individuals could be overcome,” here departing even from the Eastern fathers (75).

In the end the Great Instauration did not occur. However, Bacon did not rethink his program, claiming instead that people continued “to walk in the old path, and not by the way of my Organum.” In other words, he claimed that if only people had listened to him, the Fall as regards the natural world could have in large part been reversed.