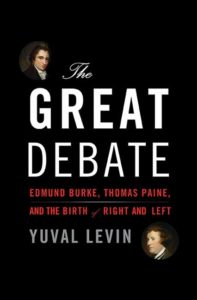 An excellent, readable introduction to the thought of Burke and Paine that also maps continuities and discontinuities to present-day politics.

One of the notable take-aways is Paine’s individualism and his confidence in human reason. According to Paine, the problems of the government exist because humans have not applied reason to government and swept away the unreasonable customs and forms of previous eras. All men have the right to sweep away old governments because government is only just if it is chosen.

By contrast Burke proceeds through careful observation of human nature. In opposition to Paine’s individualism, Burke notes that people are born into families. They are thus born with obligations that they did not choose. Buke observes that Paine and the French “revolutionaries, following Rousseau, seek to reject the duties of the family ‘as not founded in the social compact, and not binding according to the rights of men; because the relation is not, of course, the result of free election—never on the side of the children, not always on the part of the parents.'” Thus: “The family is the primary obstacle to an ethic of choice and so a primary target of genuinely radical liberal revolutionaries.”

This contrast between individualism and family is one of several illuminating contrasts that Levin draws between Burke and Paine. This is a book worth reading and pondering.