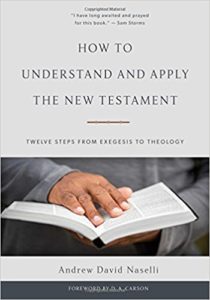 Andy Naselli has just had published a book on interpreting the New Testament: How to Understand and Apply the New Testament. For table of contents, sample chapters, and more see Andy’s post at his own website.

I’ve not yet read more than a few chapters of the book, but in an interview Andy described as the gist of his book the conclusion I argued for in my dissertation. Andy said:

The gist is that you can’t do exegesis without doing theology, and you can’t do theology without doing exegesis. They are interconnected—interrelated. So we’re just trying to make the readers aware that when you study one aspect of exegesis or theology, it’s impossible to do just that, apart from the other aspects; they are so interconnected. So if you sit down and look at a text, all of your understanding of how the whole Bible fits together is influencing how you read that text. And if you’re trying to put the whole Bible together, the ways you understand individual texts are influencing how you do that broader, macro-reading.

We both borrowed a diagram from D. A. Carson that shows the how exegesis and the theological disciplines relate.

The role of historical-cultural context in interpretation has been an interest of mine recently. See Is it True that Bible Background Context “Changes Everything”?. Though we frame the question somewhat differently, I think Andy’s discussion is on target. Andy thesis is that “background information is sometimes necessary for understanding the Bible accurately.” He calls his position “a cautious yes” to the necessity of background information.

The discussion of four dangers if one answers “yes” along with the affirmation of the Scripture’s sufficient clarity are excellent. In addition, I appreciate Andy’s sympathetic critique of Wayne Grudem’s “no.” Grudem wants to say that extra-biblical lexical study can be necessary but that historical background information is not necessary. Andy responds:

Here’s my pushback: How can you logically grant language this degree of independence from the historical-cultural context? It doesn’t seem possible because the authors use some words to refer to things outside the text (i.e., the words have extratextual referents) that the first readers would have immediately grasped but that we might not. How can we determine the meanings of words apart from a historical-cultural setting? [p. 164]

I think this is correct. However, I would note that even the lack of extrabiblical lexical information has not prevented the Bible from being sufficiently clear throughout church history. In fact, I would argue that the Bible is sufficiently clear even in translation “for us to base our saving knowledge of [God] and of ourselves, and our beliefs and our actions, on the content of Scripture alone, without ultimately validating our understanding of these things or our confidence in them by appeal to any individual or institution” (Timothy Ward, Words of Life, 127).

Andy also includes several example passages. Though it is far beyond his intent and purpose for this book, I would be interested in fairly exhaustive survey of passages to see just how necessary historical-cultural context is for rightly understanding passages.

Another example given is 1 Corinthians 11. Andy argues that background material is necessary to understand this passage and that Bruce Winter provides the best survey of the material. However, I’ve found Noel Weeks to give a telling criticism of Winter’s argument (and frankly have found Winter’s deployment of background material unconvincing in other passages in 1 Corinthians). Weeks says:

I must comment on what seems an obvious flaw in the argument. Winter sees the material in 1 Cor 11 on head covering for women as directly dependent upon imperial pressure for modest female attire (ibid., 73–91). Yet the existence of statues and images of bare-headed women, even imperial women, is a fact of the period. He postpones that information until he deals with hair styles for women, where once more the concerns of 1 Tim 2:8 are seen as responding to external influence. In that context he rather lamely suggests that the images of bare-headed imperial women are an attempt by the imperial household to display the hair treatment that was appropriate for women (104). Surely a requirement for covered female heads makes hair styles irrelevant. [“The Ambiguity of Biblical Background,” Westminster Theological Journal 72, no. 2 (Fall 2010): 233, n. 54.]

Further, Paul’s argument is not from culture but from creation in 1 Corinthians 11.

The third major example of the necessity of background information is from Revelation 3:15-16. I think this is a good example, but it’s not a slam dunk.

Greg Beale outlines the traditional interpretation and the problem he sees with it:

The image of the Laodiceans being “neither cold nor hot” but “lukewarm” has traditionally been understood to be metaphorical of lack of spiritual fervor and half-hearted commitment to Christ. One problem with this is that Christ’s desire that they be either “cold or hot” implies that both extremes are positive. The traditional view, however, has seen ‘cold’ negatively. [The Book of Revelation, NIGTC, 303]

Beale opts for the view the background to this phrase contrasts the hot, healing waters of Hierapolis and the pure, cold water of Colossae with the warm nauseating water of Laodicea (Ibid.).

Christ reveals their actual condition from the divine perspective: you are neither cold nor hot, which is probably a reflection on the fact that they are across the river from the actual hot springs, so that by the time the hot water reaches them across stream it has cooled enough to be insipid, useful for neither medicinal nor drinking purposes. The more remarkable moment of judgment comes next: Christ would rather have them either one or the other! In actuality, of course, he would prefer them to be “hot”; but if they were “cold” then they could more easily recognize their situation and be helped. Rather, his judgment is that because you are lukewarm—neither hot nor cold—I am about to spit you out of my mouth. [Revelation, NCCS, 58.]

Further Beale concedes that 2 Peter 2:21 is a cross-reference that could support the traditional view.

None of the above is meant to detract from Andy’s fine work. These are the natural passages that I would expect to find in this discussion. It does show, however, there is room for a detailed study to investigate in which passages  background material is truly necessary to understand the meaning of the passage. My hunch is that the number of passages in which historical-cultural context is helpful are numerous but that the number in which it is necessary might be fewer than many suppose.

In sum, if the other chapters of this book are as good as this one (and I would expect some, particularly those dealing with original languages, to be better), then this is a book to get and use.