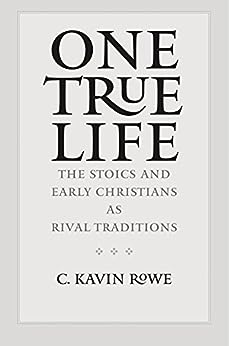 This is one of those books that stands head and shoulders above other recent books. It comes in three parts. In Part I Rowe examines the Stoic philosophers Seneca, Epictetus, and Marcus Aurelius. In Part II Rowe summarizes the thought of Paul, Luke, and Justin Martyr. In Part III Rowe investigates the question of whether these two rival traditions can be compared.

I began reading the book to gain a better understanding of Stoicism, and Rowe’s treatment in Part I is an outstanding introduction. It involves a close reading of three specific Stoics. This gives a good sense of both continuities and discontinuities between Stoics. Rowe also interacts with scholars of Stoicism, so his notes are a good guide for further study.

I only skimmed Part II. I wasn’t reading this book to be introduced to the thought of Paul, Luke or Justin. And were I to summarize the thought of Paul or Luke my treatment would be different (for instance, his treatment of faith and works was influenced by E. P. Sanders; he did not discuss union with Christ).

In Part III Rowe made a compelling case that Stoicism and Christianity were rival and incommensurable traditions. In this part of the book Rowe’s argument reminded me a great deal of Van Til, though Rowe was actually dependent on Wittgenstein and may not have read Van Til.

Rowe’s case can be summarized:

“These examples reflect the dominant assumption about the use of the word God in the Stoic and Christian texts, that is it is used in the same or similar enough ways that we can treat it as referring to the same object/subject. The Christians and the Stoics both speak of the same basic thing called God. The trouble with this assumption is that they do not…. If we pose the question of how to ‘translate’ the Stoic use of the Word theos/deus into Christian usage so that the Christians would say the same thing with the word God in their grammar that the Stoics said in theirs…it is best approximated not by God but by cosmos/ktisis.” And even then it is only an approximation since Christians have different view of creation. If one were to reverse the process and try to translate “the Christian use of the word theos into Stoic usage so that the Stoics would say the same thing with the word God in their grammar that the Christian said in theirs”—we would find no equivalent concept. The Christian would need to explain his entire narrative. “Of the many implications of this asymmetry, we need mention only two…. First, the fact that God does not mean anything like the same thing for the Christians and the Stoics makes it all but obvious that patterns of language that are directly tied to God in the grammars of the different traditions will not mean the same thing. Providence, for example, no more names a shared conviction about a God/world relation than it does a shared sense of what that God or world is. Second, precisely because of the role that God plays in each tradition, the patterns of language that are inextricably bound to God are constitutive of each traditions identity as a distinctive tradition in the first place. The consequence, therefore, of the fundamental different ‘God’ makes for the tradition’s existence as a tradition is the expectation of incommensurable (and incompatible) difference elsewhere” (227-28).