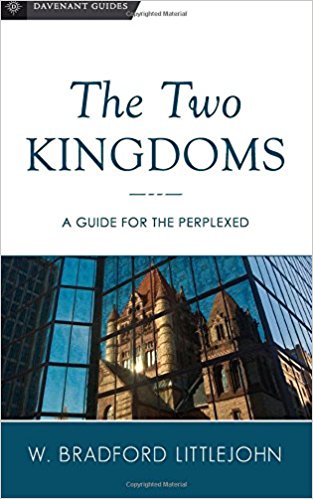 This brief book is helpful contribution to the discussion of Two-Kingdoms theology. Littlejohn states in the introduction, “I will argue that both the R2K advocates [Reformed Two Kingdoms view associated with David Van Drunen and Westminster Seminary, California] and their critics have largely missed something much richer, more fundamental, and more liberating and insightful for the church today: the original Protestant two-kingdom doctrine, as articulated by such giants as Martin Luther, John Calvin, and Richard Hooker” (6). I did find Littlejohn’s historical survey to be more accurate than what I’ve found in Van Drunen. He rightly notes that the distinction between the two kingdoms historically was not a distinction between the institution of the church and other institutions. Thus in the historical view the institutional church is part of the temporal rather than spiritual kingdom. When he surveys the impact of this historic two kingdoms theology on church, state, and market, I found Littlejohn’s applications a mixed bag. In the end, I’m still not convinced that “two kingdoms” is the best model for Christian involvement in the world. I would recommend Littlejohn’s book as a good entry way into understanding the debate.