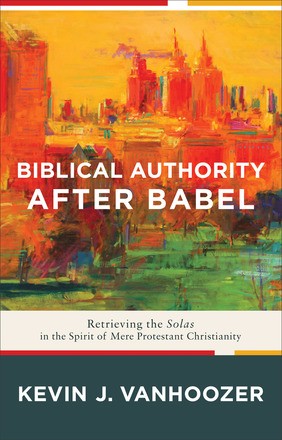 Vanhoozer rejects these claims. For instance, he observes that secularization is not a result of the Reformation. It is the result of reading the Bible in an academic, critical way rather than as Scripture. In other words, secularism is directly contrary to the Reformation approach to Scripture. Furthermore, Vanhoozer demonstrates that neo-scholastic Thomism was more amenable to secularism than the theology of the Reformation (this is a point also made by Roman Catholic Ressourcement theologians in the mid-twentieth century; see Rowland, Ratzinger’s Faith [Oxford University Press, 2008], kindle loc., 486-603).

Perhaps more plausible is the claim that Protestants cannot agree on their interpretations of Scripture, which is a problem that leads to fragmentation. However, Vanhoozer argues that “Mere Protestant Christians” actually agree on the fundamentals of the gospel story. This does not make disagreement unimportant, but it does reveal a fundamental unity that lies back of that disagreement.

Nevertheless, Vanhoozer does not leave the matter there. He engages with the issue of epistemology. He rejects an epistemology based on the church’s magisterial authority. He also rejects epistemologies based on the authority of the scholar or the autonomous individual. Instead, he argues for an epistemology based on the testimony of Scripture as self-authenticating through the work of the Spirit. As already noted, Vanhoozer by this is not advocating a raw individualism. Like the Reformers, tradition plays an important role in his theological and exegetical method. Tradition does not exercise magisterial authority, but it does serve the interpreter. The Bible alone is the final authority, but tradition gives important testimony regarding right interpretation.

So how does the preceding impact church polity and unity? Vanhoozer argues that local churches are given authority to make judgments regarding right belief and practice. They have the responsibility to rule on what Scripture teaches in these matters for the sake of “the integrity of the gospel.” (Churches typically exercise this responsibility by adopting confessions of faith and catechisms.) Vanhoozer further argues that these “local churches have an obligation to read in communion with other local churches.” (This can be seen by the way different local churches adopt the same confessions as other churches or adapt the confessions of other churches.)

Vanhoozer grants that there is a tension sometimes between unity and the purity of the gospel. As a result, he rejects ecumenism and sectarianism. He affirms denominations that hold strongly to their beliefs and that also can cooperate with denominations that differ with them.

In the end, I think that Vanhoozer successfully defends the Reformation from recent critiques. I also think his model for church unity and diversity in the present age is correct. However, based on what I know of Vanhoozer’s ecclesial situation, our judgments about implementation differ. I think this demonstrates that models can only take us so far. Spiritual wisdom is always needed to apply the model.