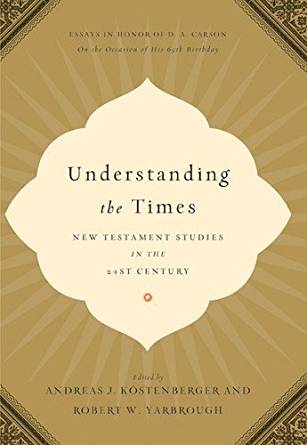 In this essay Moo examines the δικ– language of Galatians, concluding that all but one instance refers to forensic justification. Moo recognizes as he undertakes this study that the theological concept of justification is larger than the δικ– word-group and that the δικ– word-group contains senses other than the theological concept of justification. This linguistic and theological awareness helps Moo avoid missteps. For instance, Moo pushes back against those, like Michael Gorman, who wish to move the doctrine of justification away from a purely forensic concept to one that focuses on participation in Christ. Moo does not downplay union with Christ; indeed, he indicates that that concept is more central to Paul’s theology than justification (though Moo also rejects Schweitzer’s claim that justification is merely a subsidiary crater in Paul’s thought). In his interaction with the New Perspective, Moo also handles well the reality that Paul sets justification by faith alone in distinction with the works of the law while also recognizing that the justified Christian must produce good works. One area in which Moo has adjusted his view of justification in light of his work in Galatians is an acceptance now of an already-not yet structure so that there is both a past and a future justification. There are orthodox and unorthodox ways to think of future justification, and Moo’s approach (like that of Richard Gaffin) harmonizes with Reformation orthodoxy. But I’m still not convinced. For instance, I think that the subjective genitive makes sense in Galatians 5:5, removing the need for seeing a future justification in that passage. The theological reasons that Moo notes in favor of the subjective genitive seem more weighty to me than the linguistic reasons that he gives in favor of the objective genitive. Moo’s other argument is that the timing of justification seems undetermined in much of the rest of the letter. But I wonder if that is because Paul is dealing with people who are trying to be justified rather than due to the fact that Paul is viewing justification as something future.