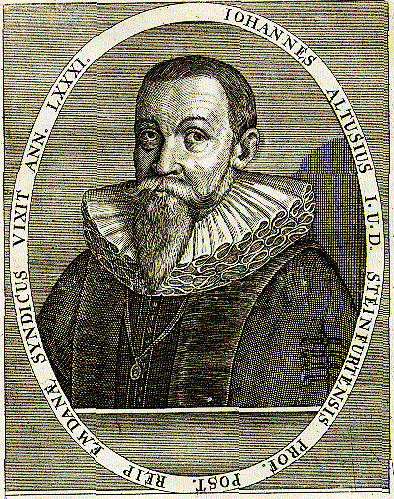 This is an early treatise of political theology from a Christian perspective by a 16th/17th century Reformed thinker. He was a colleague of Caspar Olevianus, coauthor of the Heidelberg Catechism (1563). He was an intellectual opponent to the still famous Hugo Grotius.

In defending the rights of cities and guilds, etc. against a push toward a unitary state, Althusius developed the idea of federalism. The term “federal” is related to the Latin word for covenant. For Althusius, a federal form of government is one in which the government is in covenant with the people and in which different levels of government are in covenant arrangements with each other.

The introduction to this particular translation (available for free from the Liberty Fund website) is helpful. Here’s a sample:

The first grand federalist design, as Althusius himself was careful to acknowledge, was that of the Bible, most particularly the Hebrew Scriptures or Old Testament. For him, it also was the best—the ideal polity based on right principles. Biblical thought is federal (from the Latin foedus, covenant) from first to last—from God’s covenant with Noah establishing the biblical equivalent of what philosophers were later to term natural law (Genesis, chapter 9) to the Jews’ reaffirmation of the Sinai covenant under the leadership of Ezra and Nehemiah, thereby adopting the Torah as the constitution of their second commonwealth (Ezra, chapter 10; Nehemiah, chapter 8). The covenant motif is central to the biblical world view, the basis of all relationships, the mechanism for defining and allocating authority, and the foundation of the biblical political teaching.

The biblical grand design for humankind is federal in three ways. First, it is based upon a network of covenants beginning with those between God and human beings, which weave the web of human, especially political, relationships in a federal way—through pact, association, and consent. In the sixteenth century, this world view was recreated by the Reformed wing of Protestantism as the federal theology from which Althusius, the Huguenots, the Scottish covenanters, and the English and American Puritans developed political theories and principles of constitutional design.

Second, the classic biblical commonwealth was a fully articulated federation of tribes instituted and reaffirmed by covenant to function under a common constitution and laws. Any and all constitutional changes in the Israelite polity were introduced through covenanting. Even after the introduction of the monarchy, the federal element was maintained until most of the tribal structures were destroyed by external forces. The biblical vision of the restored commonwealth in the messianic era envisages the reconstitution of the tribal federation. Most of the American Puritans and many Americans of the Revolutionary era, among others, were inspired by the biblical polity to seek federal arrangements for their polities.

Third, the biblical vision for the “end of days’ ’ —the messianic era—sees not only a restoration of Israel’s tribal system but what is, for all intents and purposes, a world confederation or league of nations, each preserving its own integrity while accepting a common Divine covenant and constitutional order. This order will establish appropriate covenantal relationships for the entire world. …

In some respects, all subsequent federalist grand designs until … the mid-nineteenth century are derived from or somehow related to that scriptural precedent. …

Althusius’ grand design is developed out of a series of building blocks or self-governing cells from the smallest, most intimate connections to the universal commonwealth, each of which is internally organized and linked to the others by some form of consensual relationship. Each is oriented toward some higher degree of human harmony to be attained in the fullness of time….

…In the struggle over the direction of European state-building in the seventeenth century, the Althusian view, which called for the building of states on federal principles … lost out to the view of Jean Bodin and the statists who called for the establishment of … centralized states where all powers were lodged in a divinely ordained king at the top of the power pyramid or in a sovereign center. While Althusian thought had its exponents until the latter part of the century, after that it disappeared from the mainstream of political philosophy. It remained for the Americans to invent modern federalism on the basis of individualism and thus reintroduce the idea of the state as a political association rather than a reified entity, an artifact that is assumed to have an existence independent of the people who constitute it.”