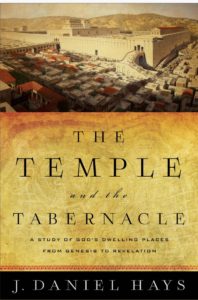 Hays begins in the Garden of Eden which so many scholars understand as its own kind of temple.

There are certainly strong connections between the garden and the tabernacle and temple, but I wonder if scholars are not being careful enough when the actually identify the garden as a temple.

I first encountered this idea when reading G. K. Beale’s book, The Temple and the Church’s Mission, part of the New Studies in Biblical Theology Series. I was less than persuaded by Beale’s argument. Later I found that Daniel Block, writing in a festschrift for Beale, also has some reservations about this thesis.

I would respond as follows:

(2) Beale concludes from the occurrence of עבד and שׁמר in Genesis 2:10 that Adam is pictured as a priest since when these words “occur together in the Old Testament . . . , they refer either to Israelites ‘serving’ God and ‘guarding [keeping]’ God’s word . . . or to priests who ‘keep’ the ‘service’ (or ‘charge’) of the tabernacle (see Num. 3:7-8; 8:25-26; 18:5-6; 1 Chr. 23:32; Ezek. 44:14)” (67). However, this is a decontextualized reading of these terms. Beale concedes, “It is true that the Hebrew word usually translated ‘cultivate’ can refer to an agricultural task when used by itself (e.g., 2:5; 3:23)” (67). In the context of Adam being placed in a garden because the garden needed a man for certain kinds of plants to grow (2:5), it is contextually more likely that these words refer to “an agricultural task.” Daniel Block rightly observes, “Lacking other clear signals it is inappropriate to read back into this collocation cultic significance from later texts (e.g., Nm 3:7-8; 8:26; 18:5-6). The conjunction of verbs עבד . . . and שׁמר . . . in association with the tabernacle suggests that priestly functions were reminiscent of humankind’s role in the garden, but the reverse is unwarranted” (Daniel I. Block, “Eden: A Temple? A Reassessment of the Biblical Evidence,” in From Creation to New Creation: Biblical Theology and Exegesis: Essays in Honor of G. K. Beale, eds. Daniel M. Gurtner and Benjamin L. Gladd [Peabody, MA: Hendrickson, 2013], 10-12).

(3) Since the cherubim are placed to guard the garden only after Adam and Eve were expelled from the garden, their presence on the tabernacle curtains is probably an indication that the way to God is still barred for sinful humans rather than an indication that Eden was a temple.

(4, 5, 6) While it may be true that the lampstand symbolized the tree of life (I am inclined to think so), and while the lampstand and other parts of the tabernacle make use of garden imagery, this only demonstrates that the tabernacle and temple looked back to Eden. It does not demonstrate that Eden was a temple. Likewise with prophetic promise that a river will flow from the temple. Speaking of the river, Block says, “While these images derive from Gn 2:10-14, without the later adaption we would not think of looking for a sanctuary here” (13). Again, to conclude otherwise confuses the reality and the symbol.

(7) Beale says that the Garden is “the place of precious stones,” but the text places the stones outside of Eden in the land of Havilah. Rather than a temple connection, it is contextually more likely that a connection exists back to Genesis 1:28 and the blessing of human rule over the earth. The rivers are highways into the wider world and in those lands are natural resources to be harnessed, such a gold, a standard medium of exchange. Also, Block notes that Bdellium “probably does not refer to a precious stone” and that it is not associated with the high priest’s breastplate. Onyx is connected to “the priestly vestments,” but not exclusively so (13-14).

(8) Block says on this score, “As noted earlier, while the HB [Hebrew Bible] never associates wisdom with the priesthood, its significance for kingship is explicitly declared in Prv 8:12-21 (especially vv. 15-16). . . . To associate the wisdom motif with the law stored inside the Holy of Holies and eating the forbidden fruit with touching the ark is farfetched and anachronistic” (15-16).

(10) The argument from Ezekiel 28:18 is difficult to sustain. It seems best to understand Ezekiel as drawing a parallel between the king of Tyre and the cherub who was in Eden just as in the previous passage Tyre had been spoken of in terms of a sunken ship. Beale wishes to identify the cherub as Adam, but it is more likely that the cherub should be identified as Satan, as cherubs are angelic beings, not human beings. Finally, Beale wishes to identify the sanctuaries of Ezekiel 28:18 with Eden. Not only does the plural pose a problem (if there is precedent for identifying that courtyard, holy place, and holy of holies as separate sanctuaries, Beale does not provide it), but this profanation is connected to “the unrighteousness of your trade.” Thus the profanation of the sanctuaries is probably referring directly to the king of Tyre and not to an event that happened in Eden.

In my response to reading Gn 1-3 as temple-building texts, I have hinted at the fundamental hermeneutical problem involved in this approach. The question is, should we read Gn 1-3 in the light of later texts, or should we read later texts in light of these? If we read the accounts of the order given, then the creation account provides essential background to primeval history, which provides background for the patriarchal, exodus, and tabernacle narratives. By themselves and by this reading the accounts of Gn 1-3 offer no clues that a cosmic or Edenic temple might be involved. However, as noted above, the Edenic features of the tabernacle, the Jerusalem temple, and the temple envisioned by Ezekiel are obvious. Apparently their design and function intended to capture something of the original environment in which human beings were placed. However, the fact that Israel’s sanctuaries were Edenic does not make Eden into a sacred shrine. At best this is a nonreciprocating equation. (20-21)

In sum, though the tabernacle and temple looked back to the garden of Eden and the loss of the presence of God that occurred with humanity’s exile from the garden, the garden itself was not a temple. In the grand scheme of things, this is not a major difference of interpretation, but it is still worth maintaing precision in our understanding of these foundational parts of Scripture.